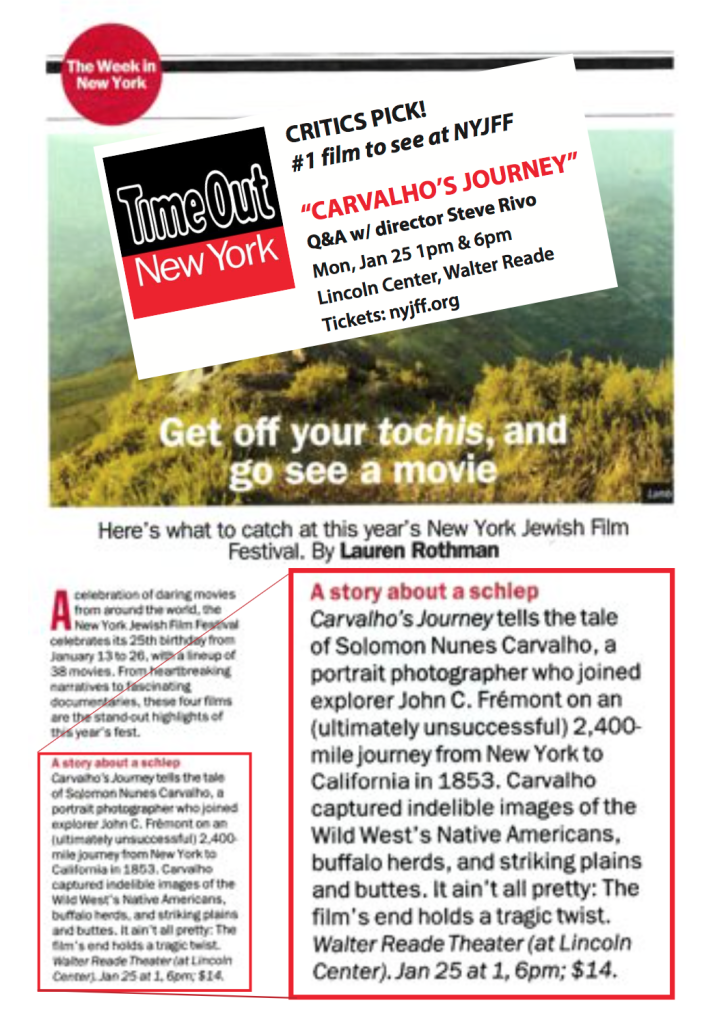 “Carvalho’s Journey” tells the story of Philadelphia artist Solomon Nunes Carvalho, one of the first photographers of the Western United States. Accompanying explorer John Fremont on his westward search for the best route for a transcontinental railway in the 1850s, Carvalho used daguerreotypes to chronicle the expedition’s findings. Stories about Jews on the frontier are rare, and “Carvalho’s Journey,” filmed largely among the astonishing geographic formations of the Southwest, is both a surprising and a visually stunning work.

In week two of the NY Jewish Film Festival, activism and justice seeking is a theme that binds by George Robinson:
Solomon Nunes Carvalho was an unlikely candidate for activism or adventuring, but he enthusiastically took on both in pursuit of art. “Carvalho’s Journey,” directed by Steve Rivo, is a spirited retelling of the all-but-forgotten story of the Baltimore-based painter and daguerreotypist, a Sephardic Jew who was probably the first professional photographer of his faith, and the man who documented Colonel John Fremont’s quixotic fifth expedition across the American West in 1853. Rivo cleverly opens his film in the middle of Carvalho’s story, with his decidedly urban protagonist agreeing to go into the wilderness with Fremont for a one-of-a-kind journey. The well-to-do observant Jew has never even saddled a horse, let alone trekked through the deserts and mountains awaiting him.

It sounds like the scenario for a Jewish remake of “The Revenant,” and there are more than a few passing similarities, but the spiritual and cross-cultural odyssey involved is more benign and more fruitful, and the result, while not as portentous as that of the Oscar-nominated adventure, is no less far-reaching in its implications. Rivo tells the story briskly, with immeasurable assistance from Robert Shlaer, a modern-day practitioner of the daguerreotype who has been recreating Carvalho’s trajectory.

…Fascinating documentary
…Rivo’s editing is subtly precise. The filmmaker understands the necessity for continually flowing the variety of scenes, shots, and subjects to keep the cinematic pace lively and engaging. He is expert at producing a fount of information in a completely absorbing way which allows one to walk away remembering salient historical information
…Carvalho’s Journey speaks to the adventurer in all of us. With an excellent script and adept editing and careful culling and inclusion of artifacts and footage of the places that Carvalho visited, the documentary allows us to marvel at our illustrious history and the brave and wild men and women who saw opportunity and took risks to achieve something no one else had done before.

And there’s Carvalho’s Journey, a documentary about an observant Sephardic Jew who accompanied explorer John C. Fremont as the photographer on his 1853 Fifth Westward Expedition, a 2400-mile journey from New York to California, which should offer an interesting lens on cultural interaction. Another documentary, Projections of America, by director Peter Miller, tells the story of 26 propaganda pieces commissioned by the American government to show what life was like in the U.S. during WWII—”stories of cowboys and oilmen, farmers and window washers, immigrants and schoolchildren, capturing both the optimism and the messiness of American democracy.”

The process of producing photographs on silvered plates, which Louis Daguerre first unveiled to the public in 1839, caught on among rich and middle-class patrons seeking to document their loved ones, possessions and travels. This year, the photos have been the subject of books, exhibitions, scholarly presentations and at least one movie.

A new documentary, “Carvalho’s Journey,” about the 19th-century daguerreotypist Solomon Nunes Carvalho’s travels from South Carolina to California, is being shown at film festivals.

Written and directed by Steve Rivo, Carvalho’s Journey (which received its world premiere at a free screening during the 35th Annual San Francisco Jewish Film Festival) is equally impressive for the peculiar moment in art history it explores as well as for the way it captures the contribution of an observant Sephardic Jew to the history of the American West. This documentary is a very rare treat. 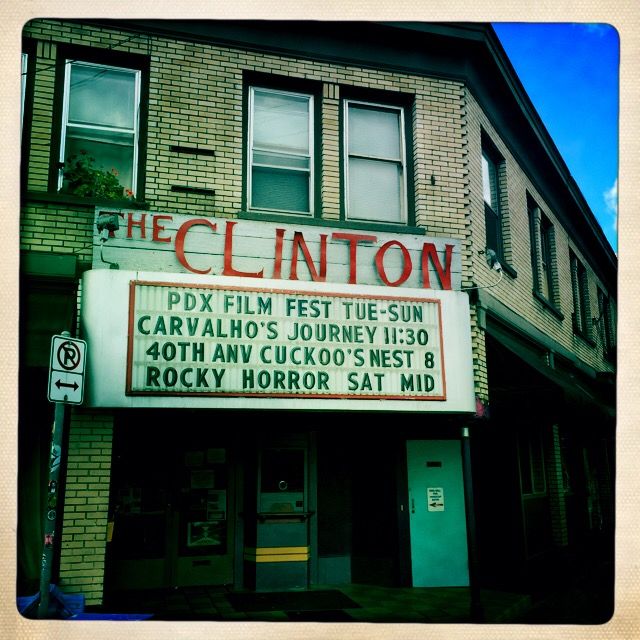 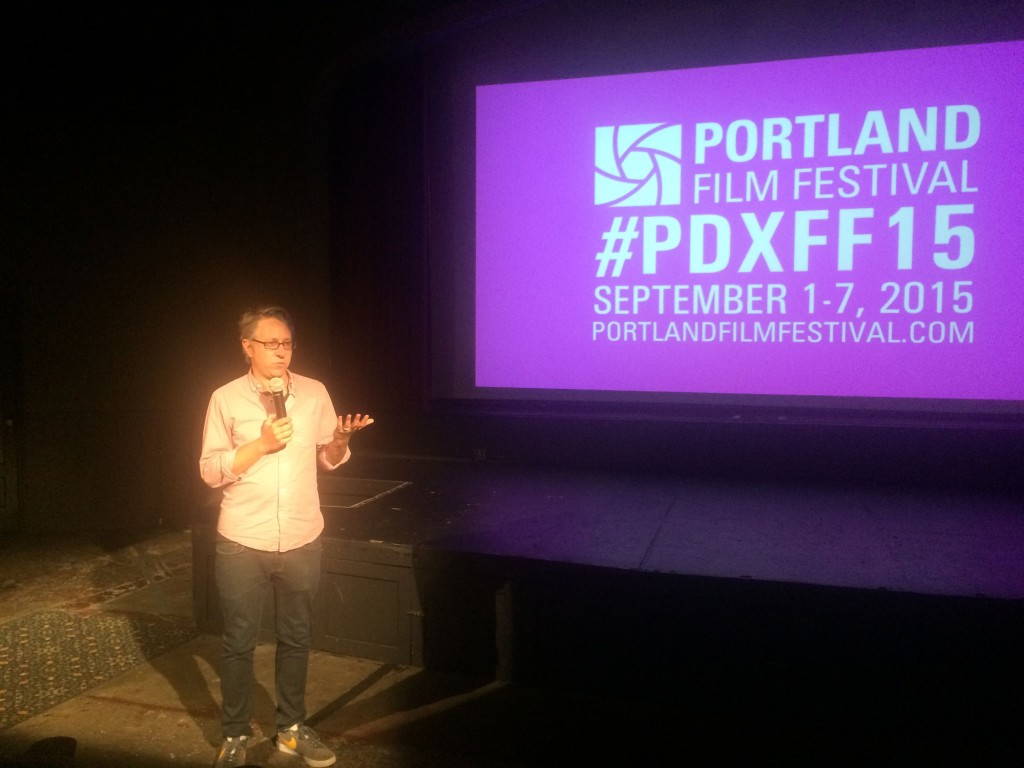 This year marks the 35th anniversary of the San Francisco Jewish Film Festival, the world’s first and largest such festival.

Even in the Bay Area, one of the globe’s top film festival destinations, the Jewish Film Festival impresses with its ambition (five venues in four counties: San Francisco, Alameda, Santa Clara and Marin) and its length (18 days: July 23 to Aug. 9). With opening-night events in San Francisco, Palo Alto and Oakland, there’s more than enough film, food and music to go around.

Carvalho’s Journey: Solomon Carvalho was a Baltimore Jewish daguerreotypist and artist who went on an ill-fated expedition with John C. Fremont. Not just a travelogue but a look at how American Jews lived and were perceived in the 19th century. (2 p.m. July 28, Castro; 4 p.m. July 29, CineArts; 2:40 p.m. Aug. 4, California)